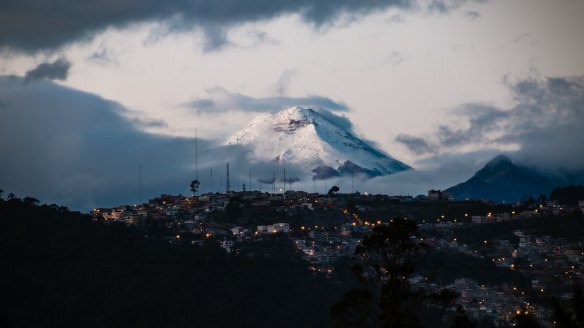 thank you Cesar Viteri for the photo

We took a few weeks off from the blog posts at TripTuner because we were doing some late summer traveling ourselves, but are now ready and raring to highlight more of the great destinations found on our site. Columbus Day is just a few weeks away, so now’s the time to start planning your trip. In honor of Columbus’ arrival to the new world, we thought we would highlight a destination in Latin America. This week’s locale is one of the most beautiful capital cities in the Spanish-speaking world: Quito, Ecuador.

Folded between green pleats of rolling hills and the Pinchincha volcano, Quito’s setting is spectacular. Terraced plots on the hillside are decorative mosaics above the shiny metropolis. The whitewashed buildings and colonial masterpieces of Old Town give way to expansive parks and modern edifices as you move up the valley. It really is quite staggering to find such natural beauty in a metropolis of about 2.5 million people.

My husband Bryan and I spent weeks on end in Quito while we were researching a guidebook on Ecuador. The town has it all – intriguing museums, excellent hotels, superior shopping opportunities, and unique colonial architecture. You might even find a Columbus Day (know in Ecuador as “Día de la Raza,” or “Day of the People”) parade while you’re there.

Here are some of my highlights of the city:

Old Town – Quito Antigua
There may be a higher concentration of colonial churches and religious art in Quito’s downtown than anywhere else in the world. That, and the fact that many of the buildings have been maintained in the colonial style, led UNESCO to name the entire area a World Heritage Site. I won’t go into detail about all there is to see downtown, but will simply call out some of my favorites. The tranquil Independence Plaza, with its spotless, manicured lawns, is a must-visit. Closed to traffic on two sides, it’s one of the mellower spots downtown. The soaring Gothic and Baroque-influenced Metropolitan Cathedral, one of the oldest in South America, sits on one edge of the plaza, while the Government Palace is on another. Also worth a visit is the San Francisco Monastery – take a look up to the choir area to notice the elaborate Moorish-style ceiling and large organ. The organ, capable of playing over 5000 notes, is only played once a year because the intricate wooden ceiling is made without nails or glue. Should one piece of wood be vibrated loose, the whole thing will fall.